In May 2012 I attended the inaugural MinneAnalytics: Predictive & Social Media Analytics and the world of ‘Big Data’ Conference at the Medtronic campus in Mounds View, MN.  I presented work from the Center of Excellence for Big Data (CoE4BD) with colleague Brad Rubin, Ph.D. in the Graduate Programs in Software at the University of St. Thomas.  Our session went well.

The highlight of my day was watching Robert Stephens @robertstephens http://www.robertstephens.com in the first public, post Best Buy event at which I’ve seen him.

(Just for background, I first met Robert Stephens when my long-time collaborator Janelle Jurek introduced us over lunch in the 1990s.  Janelle said, “There’s this guy who used to do tech support for our computers at the U of M labs when I was a grad student. He has started a company called ‘Geek Squad,’ and he has some big ideas.”  Well, Robert Stephens had big ideas like the Grand Canyon is a creek bed!  He told us about his company, marketing and branding plans, his movie script, his book, you name it.  I was enthralled with his creativity and insight.  Over the years, from the fifth anniversary party at The Lounge to MHTA to the St. Paul Area Chamber of Commerce I never, ever missed a chance to hear him speak.  He is an audacious, edgy, insightful marketing genius.  And, although he often says, “I just make this sh!t up,” I know that although his presentations are always fresh and energetic, he has carefully crafted his message, and he always knows where he’s going.

Over the years, I watched Mr. Stephen’s presentations as a young-buck entrepreneur (Robert Stephens 1.0) with edgy metaphors.  For example between branding and religion – religions have been around for thousands of years, and yet are often based on a few guiding principles summarized in one book.  As he sold Geek Squad to Best Buy – in characteristic swagger he always says Geek Squad acquired Best Buy– his presentations became a bit more mainstream.  For instance,  the religion metaphor went away but his attitude remained.)

So, after leaving Best Buy as its Chief Technology Officer (Robert Stephens 2.0) in the spring of 2012, I enthusiastically anticipated Mr. Stephens’s presentation at Medtronic in May.  I was not disappointed (but then I’m a fan, I probably can’t be), and, although he claims the following, my observations are different: 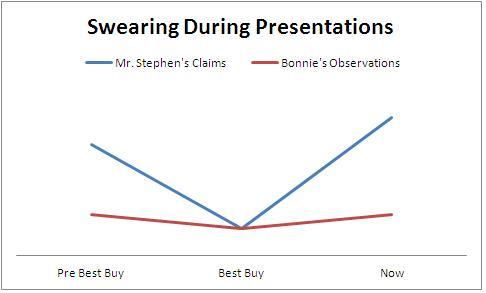 Among the great points that Mr. Stephens made in this presentation were:

These are great ideas, and, of course, the presentation was chock full of challenging concepts like “once is a hint, twice is a pattern, three times is a preference, and four times is a habit (lock in)” … but I’m not going to explain them all here.  I just want you to join me in the Robert Stephens fan club, and follow him for yourself. 😉